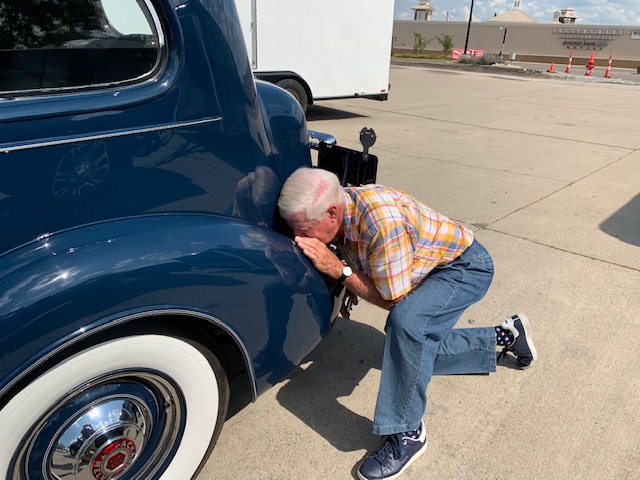 Recently, Carol and I drove our Classic Packard to an Ohio Region Mini Caravan hosted by David Johnson. Steve and Alice Tarr were visiting from Florida and rode with us. On the morning we left I used the electric fuel pump to charge my carburetor float bowl and the engine fired immediately. I turned the electric pump off as it was not needed once the engine started.

After driving for a couple of hours I stopped for fuel. It was a rather warm day and I should have left the engine running as I was using fuel with ethanol at the time. Ten minutes or so later I tried to start the engine but vapor lock had reared its ugly head and no amount of cranking would produce even a cough. I flipped the switch for the electric pump and listened for the normal clicking sound a functioning pump produces. There was no sound. This was not a good time for the electric pump to fail, but that was the case.

I thought that maybe the engine would start after a few minutes of cooling, but I had no such luck. I spent ten minutes intermittently cranking the engine. All the while I was trying to figure out how to get my car away from the pumps at this busy station. It occurred to me that if I could get some air pressure in the fuel tank that would force some fuel up to the carburetor. No air pump was available, so another solution had to be found. I had what I thought was a silly answer. Could I blow in the tank with enough pressure to do the job?

I removed the gas cap and pressed my mouth against the filler pipe. The notches in the filler pipe made this difficult so I had to press pretty hard to achieve a seal. I was surprised at how much pressure I could force in the tank. I didn’t expect what happened next! When I removed my mouth from the filler pipe what seemed like a gallon of gasoline burped out of the tank and hit me square in the face, including my eyes. After recovering from that episode, I climbed in the car, hit the starter and the engine fired immediately. At the Ohio event a couple of old timers told me they had achieved success with vapor lock using the same method.

Steve Tarr took the photo you see here. This is not a staged photo. I think he took it thinking he could embarrass me later showing me doing something so stupid. Sorry Steve! Don’t worry, you’ll get another chance!