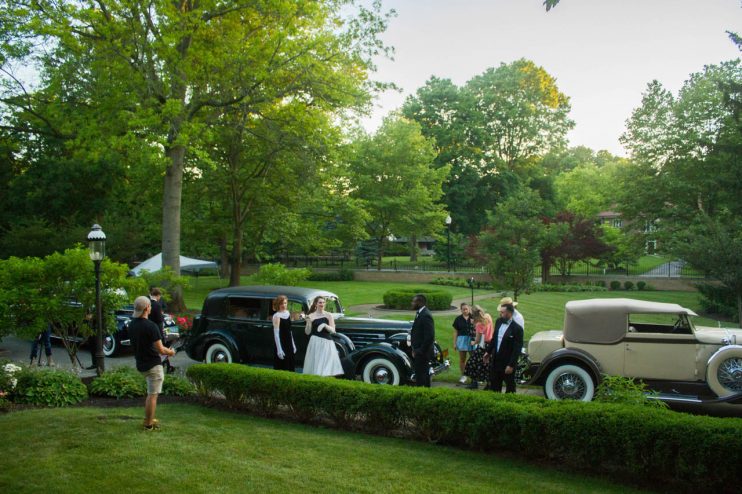 by Jim Lerums and John Klein

Did you know that Indiana Region’s Classic Car Motor Oil is distantly connected to the production of the movie Mayberry Man? The connection began early during 2020 when John and Elaine Klein were asked if their home could be used to shoot scenes for a movie. The movie, Mayberry Man, is about an arrogant movie star who is busted for speeding in a small southern town and sentenced to attend Mayberry Fest, a weeklong festival celebrating The Andy Griffith Show. Immersed in a modern-day Mayberry, the actor is given a chance to discover the true meaning of friendship and family.

John and Elaine agreed and during a beautiful September day “Hollywood” descended upon their home for a day during which two outdoor scenes were shot for the Mayberry Man and can now be seen in the movie recently released to selected theaters. Sometime afterwards, Christian Griffith, a local cinematographer who participated in the movie’s shoot, called the Klein’s to see if Ophelia Grey Films (OGF) might use their home for another movie. Christian, along with his friends and business partners, Emmie Wright and Mikala Cunningham, are producing through Ophelia Grey Films The Curious Case of the Davenport Children, a three-part story.

When John and Elaine along with Jim Lerums met with Emmie and Mikala to discuss the possibility of shooting scenes of The Curious Case of the Davenport Children at their home, they were shown a very alluring and professionally produced perfume video commercial. When Jim asked Emmie and Mikala if they would consider shooting a video commercial for Classic Car Motor Oil (CCMO) sometime while they were filming The Curious Case of the Davenport Children, the answer was, “Yes”.

With the alluring nature of the perfume commercial in mind, John suggested making the CCMO commercial in a theme similar to the classy “He Drives a Duesenberg” and “She Drives a Duesenberg” ad campaigns based on artwork by Paul Gerding.
Emmie took it from there, drafted the script, and along with Mikala, Christian, and fellow actors and crew members organized the production for June 17th. With assistance from his apprentice mechanic, Jim Lerums, John staged outside the front of their home his 1931 Duesenberg, 1937 Packard Formal Sedan, 1941 Packard club coupe, Elaine’s 1967 two door Camaro (which she bought new off the showroom floor), and Andy Wolf’s vintage Chevrolet pickup truck. Elaine’s gardening made the yard perfect, and the beautiful weather made it possible to complete the shoot in one day.

A not ready for prime-time version of the Classic Car Motor Oil video commercial was screened on a 42” display at the CCMO sales table during the Cruise Indy show in Carmel recently. John and Elaine are making their acting debut in the commercial, and John was a “One Take Wonder” in his scene and got it right the very first time.

The Club is grateful for the creative talents Ophelia Grey Films and Eric Villaneuva. Follow the links below to check out these video professionals.