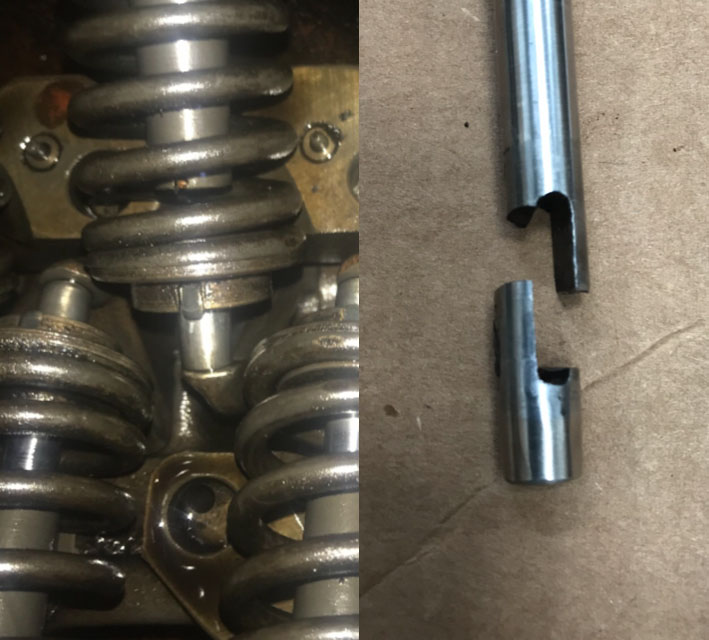 During the “social distancing” of the Coronavirus pandemic Carol and I got tired of being cooped up so we took a drive in my favorite Packard, the blue seven passenger sedan.  I suppose we drove around fifty miles and were close to home when I noticed a different sound emanating from the engine.  I pulled into the car barn and lifted the hood.  With the engine running there was a “woof, woof, woof” noise coming from the air cleaner. I checked the tailpipe and found a similar noise there.

A weak compression in one or more cylinders was suspected so I performed a compression check on all cylinders.  All were in the 100 pound range except number three on the left side which was zero.  I figured I was in for some mechanical work.  A broken valve, a broken valve spring, or a misplaced valve spring keeper key was suspected.  To verify this, I put an air compressor hose in the spark plug hole of the number three cylinder on the left side.  My chief helper, Carol, came out from the house and listened to the exhaust pipe and confirmed that, yep, lots of air was coming out there no matter the position of the piston.

I was able to see about half of the exhaust valve through the spark plug hole.  I took a screwdriver and pushed on it and the valve moved down a bit.  This was not a good sign.  With the ignition key off I cranked the engine for a few seconds hoping the cam would lift the valve up.  The valve did come up and I was able to hook a small Allen wrench on it and pull it up even further.

With having two of my other cars under restoration in my shop, this was not a good time to have another one torn down.  I thought about pushing “Old Blue” aside and working on it later.  With nice weather coming I did not want my favorite driver out of action, so I decided to get to it.

Getting to the valves on any engine is a lot of work and even more so on a Packard Twelve.  I pulled the car under my lift and threw a nylon rope over the lift’s top crossmember and used it to tie both of the hoods up out of my way.  Then I removed the air cleaner, carburetor, horns, and anything else that was hooked to them or in the way.  The exhaust and intake manifolds were next.

They are heavy and are not easy to finagle out because your arms have to be straight out which means you have to have lots of upper body strength.  I don’t!  Luckily, one of the farm guys fits that bill to a “T”.  A quick call to him and within five minutes both manifolds were on the bench.  The valley cover was next and was easily removed.

Next, I removed the cylinder head.  I grasped the problem exhaust valve and it slid out very easily.  Well, most of it came out.  About three quarters of an inch of the valve stem remained in the valve spring just outside the valve guide.  (see the pictures).  Fortunately, the keeper key and the spring washer and the valve spring were still in place as if nothing were amiss.  If any, or all, of these pieces had dislodged I imagine damage would have occurred.

I had some old valves and I hoped I might be able to use one, but they were all too short having been ground to fit an earlier engine rebuild.  I ordered one from Egge and it arrived a week later.  Master Mechanic Tim Stone fitted and installed the new valve and I reassembled everything else.

Tim gave me invaluable advice about how to do the work and gave me the idea for the title for this piece. That was his answer when I asked him why that darn valve broke.